I remember seeing them on campus in high school, with their neatly pressed uniforms, upright posture and how they always walked around in groups of two or more. They greeted you with a smile and a firm handshake then usually began the conversation with questions such as, “so where do you see yourself in five years?” I never paid too much attention to the recruiters. I’d usually end the conversation quickly or dodge their questions. I thought recruiters would pressure people into joining the military. I felt they were trying to fill their quotas and with limited time to fill them it makes it easier to target low-income families where the people are more likely to need the jobs, money and education the military can offer. The military has a history of being the only way out for poor kids, considering it provides food, housing and a salary. Young people in wealthier neighborhoods have a lot more options available. They may not need to escape current life situations.

Sophomore year, I found out my best friend was joining the Marine Corps. I began to take notice of how many times a week I’d see recruiters walking around and what branches were there and the different activities they’d do. I knew the military wasn’t for me but for people like Tatyana Londono it is a question they face.

Tatyana is a seventeen-year-old junior at Merced High School being recruited into the Air Force. She comes from a family with a military background, her father is a veteran of 23 years and two out of her three brothers are serving in the military. Growing up in a military family, she had always been surrounded by it and had an interest at a young age. However, Tatyana enlisted for her own personal reasons and says, “I’m following their footsteps but walking my own path.” She joined because it is her dream and also to honor her cousin Frank Gasper, who made the ultimate sacrifice.

Her family has been involved in her recruitment and supports her 1000 percent in any decision she makes. On the day of her 17th birthday, she walked into the recruitment office and scheduled an appointment with Sgt. Pointer. She feels he is very supportive and keeps her informed. She looked into every branch of the military and feels that the Air Force is the branch that would assist her and suit her needs the best throughout her career. She considered medical training before deciding she wants to be in Security Forces.  She’s taken her ASVAB and parental consent forms have been signed.

According to Tatyana, “the majority of the students at my school get tired of seeing the recruiters because they are there so often but for others they are a good resource and they approach them for information they might want.” Tatyana admits she fears facing things like homesickness, facing the unknown and possibly losing someone she may develop a good friendship with.

Each individual has personal reasons to join, whether it is to fulfill a dream, or ensure financial security and or perhaps because it may seem to be their only option. 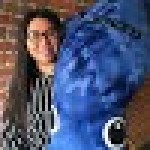