Photos and story by Alyssa Castro

Last weekend, I took a trip to Los Angeles, CA to serve as a docent for Manifest Justice.

Manifest Justice is a pop-up art exhibition in LA, put on by The California Endowment and Amnesty International, that uses art to highlight the inequities of the society we live in, while also using creative expression as a vehicle to advocate, dream and struggle for a more just society for all.

I spent a weekend working the exhibit, giving guided tours to attendees and participating in workshops. During the sliver of free time I could manage, I took a series of photographs highlighting the pieces of art that most impacted me. I’ve never been exposed to such a large amount of art that highlights social justice. Joseph Delappe’s “Liberty Weeps” cardboard installation was powerful. Lady Liberty herself is an immigrant, she came from France. How I saw it, she now weeps for the immigrants living in the US today. Merced County is known for it’s large community of undocumented immigrants, so I like to think she’s weeping for them too. The stickers inside this riot police helmet read: “Dear officer, please remember you are armed. I am not.”

I liked that people could take the stickers to use as a small tool to promote safety and the need for change in how police and community interact. I wasn’t able to get the name of the artist who did this amazing installation, but it really hit home. An IV machine transformed to dispense soda, the dark joke is put in context by two stats: the number of veterans who lost limbs in the Iraq and Afghanistan wars set against the number of Americans who lost limbs to Type 2 Diabetes during the same time.

In Merced, this is even more relevant. I read that a USC study found that 1 in 10 people in the Central Valley have diabetes while statewide the numbers look more like 1 in 13. I’ve had family and even younger friends who are faced with this life-long health challenge. This wall was amazing. The caption speaks for itself. It really hit home to me because Merced is where that one lone university was built nearly a decade ago. This installation seemed cute at first but upon closer inspection it was very chilling. Two wooden statues on a seesaw, one holding a gun and the other with their hands up. The wooden statues being blankfaced made me think they could be anyone, both as an aggressor and a victim. The seesaw motion made me feel like the police violence we’re living in is a repetitive cycle. Jordan Webber’s “American Dreamers (phase 2)” was definitely one of the most impressive installations. Seeing the plants growing inside of the wrecked cop car made me think that despite what kind of oppression we live through, life always finds a way through. Jordan Weber actually took half of an NYPD cop car and joined it with half of a Ferguson cop car to link the police violence being seen in two different parts of the country and show it’s part of the same system.

During the opening night of the exhibit, people could actually smash tomatoes on the cop car. This wall was dedicated to political protest posters from throughout the 20th and 21st century, courtesy of the Centger for the Study of Political Graphics. These protest posters show us how art is an essential tool in organizing and educating our community. This is essentially a map of our history where we can see how art has captured the essence of important moments in our world. 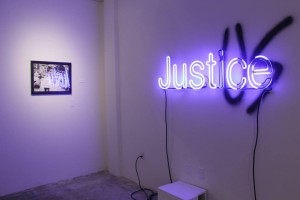 Aaron Sandnes’ “InterestoftheStrong (Thrasymachus) – Blue” was a very eye-catching installation. Everyday we can use art to fight for justice and give voice to the voiceless. Do we want justice or do we have just us? Gerri Lawrence, in collaboration with Raul Ocampo, created “Trayvon Memorial.” It’s an image of the now infamous picture of Trayvon in a hoodie, but it’s assembled of a collection of portraits with people wearing hoodies. This makes me think it could have been any other young person of color in Trayvon’s shoes. Are hoodies dangerous or is it our perceptions of the people in them? The Prison School Room was heavy. The room was split, half was a class room and the other half a prison cell. The contrast was massive. Inside each half there were messages but none as direct as the one that crossed both rooms: we spend $62,300 per inmate housed in California but only $9,100 per public school student.

Think of what kind of future we could build in our community if we took the money spent on prisons and spent it on schools. Those investments would break the school to prison pipeline and show our young people that their education is worthy of our deepest investments. Munk One’s “43 Missing Students” is a piece that is not only strikingly beautiful but packs a powerful message. The ’43’ on the Zapatista mask of the indigenous woman represents the 43 missing students of Ayotzinapa and the butterfly on her bicycle is there to remind us that migration is beautiful and natural. This piece references Eric Garner in NYC. He was the Staten Island man that was arrested for selling loose cigarettes after breaking up a fight and died via illegal police chokehold. This one threw me for a loop because it’s a situation many folks in Merced can relate with. The liquor stores around my apartment sell singles all the time. I know that’s not legal, but is murder the appropriate consequence? It is easy to forget how essential water is to our daily health. The Community Water Center reports that over 1 million Californians do not have access to clean water, more so for rural communities like the one I live in. How would we live without clean water? Ti-Rock Moore’s “Protect and Serve” piece is seen here, a minimal piece that is packed with symbolism. To me this piece speaks to the relationship law enforcement has in the justice system, it seems like law enforcement can do whatever it wants within our courts. The piece also reminds me that as people of color, we have a long history of having lives of little value in the eyes of the holders of power. Kyle Goen’s “These Are My Brothers: Ayotzinapa” photo installation was dedicated to the 43 still-missing and presumed dead students in Ayotzinapa, Mexico. These look like people that could be living around the corner from me in Merced. Kyle Goen’s photo piece was interactive as well. The previous picture is what you see with the naked eye–dulled out version of headshots of the Ayotzinapa students. When you took a picture of the photos with flash, they lit up. This was to show that unless we use our collective power and voice to shine a light on the injustices experienced by our people, they won’t be seen nearly as much.